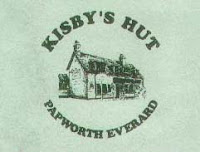 The weekend before last I paid a visit to Preston, Lancashire, a haunt of my mother's family during the nineteenth century. My great-great grandfather (and his father too) ran a small hotel on the outskirts of the town. To my amazement and delight it is still open today and trading under the same name, the "Grand Junction", a name it has now retained for almost 150 years!

Of course, the most famous Kisby watering hole is "Kisby's Hut" near Papworth Everard, opened by Samuel Kisby circa 1770. It closed recently, after 230+ years trading (though it only held the name "Kisby's Hut" sporadically during that time).

My greatx3 uncle James Kisby was landlord of the "Boat & Anchor" just outside Whittlesey, Cambridgeshire. Interestingly, in the 1901 Census he is described as 'Innkeeper & Shepherd', which is certainly a nice trick if you can tend your flock and pour a pint at the same time!! I expect he needed to employ baaaaa staff ;o)
Posted by Sean K at 23:27