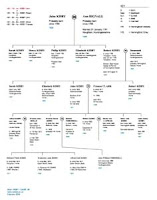 Computer is on the blink, which has spurred me to get some of my Kisby records in order. I've been writing up some of the Kisby lineages from which we all descend. In fact, we Kisby's seem to descend from a surprisingly few 18th century families.

The Kisbee's across the world all descend, by one route or another, from Thomas Kisbee of Barnwell, Northamptonshire.

There were Kisby's in Ulster during the 19th century, they may be linked to the 18th century Kisbey's of Dublin. Or maybe not.

From what I can see, the remainder of us seem to result from only eight English Kisby families from the 1700's. Three of them have strong links to the Fenland market town of Whittlesey and may, in turn, be connected to one another. Two families originate from close to the city of Peterborough. There is then another cluster around the east of Northamptonshire and neighbouring Huntingdonshire, which may have a connection at some point (I expect they moved down from the Peterborough area).

All in all, not many families at all, which is useful for yours truly when I write them up.