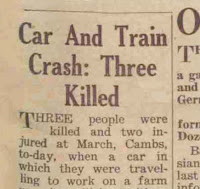 The British Newspaper Archives have recently made available images of newspapers going back to the 1700's. I couldn't resist paying my £6.95 to see which Kisby's and Kisbee's had hit the headlines. Fortunately they were few and far between because generally, when they did surface, it was because of an involvement in an unfortunate accident, or a crime.

The earliest mention of the surname seemed to be in 1783, when the intriguingly named Thomas Kisby Twelvetree escaped from Bedford gaol while awaiting hanging for horse-stealing. A five guinea reward was offered for his capture, (though there's no subsequent report about whether the reward was paid out).

John Kisbee (see previous 'Kisby Crims' post) appears numerous times in the Stamford Mercury during the 1830's and 1840's, charged with various crimes from vandalism to theft. He was often living on poor relief so probably driven to crime by poverty ...or possibly sheer opportunism - in 1847 he "appropriated" £5 6s and a cheque for £11 14s which had been dropped by a wealthy gentleman. John caught a train to Peterborough and changed two £5 notes at a pub, raising suspicions somewhat. He was arrested at Stamford railway station on his return. Interestingly he was bailed from gaol by his father, George.

In the same year Elizabeth Kisby, a cook for the Duke of Brunswick, testifies in court on behalf of her master after a claim was made against the Duke by his chimney sweep. Elizabeth blamed the chimney sweep for a fire (causing £5 damage) while the sweep blamed the cook. The sweep claimed he had not been properly paid for three years, while the Duke wanted to offset the damage against the debt. Surprisingly the Duke was found at fault and had to cough-up!

Elsewhere 9 year old George Kisbee, 22 year old George Kisby and 34 year old William Kisby met tragic deaths: young George poisoned himself by inadvertently drinking carbolic acid in 1878; George Kisby was crushed to death by a coal wagon in 1890 after working, without training, in a coal mine for less than a week; William Kisby reached national attention when he and two women employees were killed by a train in October 1943, while driving across a railway level-crossing.

I've been intrigued for a while by "Edward" Kisby and "Helen" Kisby, his wife, a couple of actors who appear in the 1891 Census. The story unfolds somewhat in The Era, a theatrical newspaper of the 1890's, where E. T. Kisby performs across Britain in a variety of secondary roles. More intriguingly his young daughter seems to be a child acting prodigy, known as "Little Vera" and receiving positive reviews on each occasion. Unfortunately being a child prodigy has a time limit and the reports die out after 1897 (when she would have been 14 years old).