Living on the edge 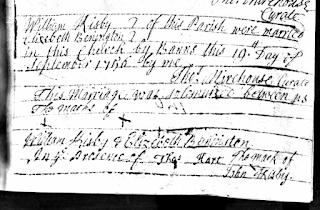 One of the few advantages of the UK Covid-19 lockdowns is the availability of the Ancestry genealogy website at home, via my local library catalogue, while the libraries have been closed to the public. Instead of enjoying the longer daylight hours on long walks or exercise, I've been hunched over my computer searching through old documents.

Ancestry seem to have excellent coverage of Northamptonshire parish records, This is great for me, because the Kisby heartlands straddle the northern borders of this county, around Peterborough in particular. Unfortunately within a couple of miles are the borders of Cambridgeshire, Lincolnshire and Huntingdonshire, which mean roving Kisbys can go off the radar quickly (though radars hadn't been invented yet) by travelling only a relatively short distance.

Some of the parish register records are wonderful, filled with fascinating anecdotal detail. In one parish, the curate records the young men that have been "killed by a cart" - at least one per year! Another tells of the tragedy of the vicar's wife accidentally killing her two young sons by poisoning, while treating them for worms.

One tiny village I'd never previously discovered, Etton, has been a key to me making a few more links. Clement Kisby, the caretaker of Peterborough Cathedral (see previous post) baptises a daughter there in 1645. Just over a century later, William Kisby and Elizabeth Bennington marry at St Stephen's Church, Etton, and it turns out they are the parents of the Kisbys of Langtoft, Lincolnshire - William and Robert, who bequeathed us many modern day Kisbys. Etton is a one and half miles south of the Lincolnshire border, while Langtoft is a similar distance north. I even found one of the most itinerant Kisby's (a test for genealogists), John aka William Kisby - a shepherd who moved between Peterborough, Baston (Lincs), Whittlesey (Cambs), Gedney Hill (Lincs) and back to Peterbrough - baptising his oldest children in Etton.

Hopefully Covid-19 is now behind us, we can start visiting libraries and record office again and I can re-subscribe to Findmypast to scour the Cambridgeshire records.