It's rare that I receive any communication these days from a fellow Kisby. I expect this is because there's so much available online these days, fellow Kisbys are able to satisfy their curiosity about their ancestors with a few clicks of the mouse.

However, I had a fascinating email last week from the descendant of a line of Irish Kisbys. Well, they were Anglicans, traced back to William Kisby born circa 1755, so may well have come from England via the military or some other route. Coincidently I'd taken out a subscription to RootsIreland in July so already knew of William's descendants, John Gilman Kisby and William Joseph Kisby, but hadn't worked out the connections.

John Gilman Kisby trained as an apothecary and his son William Joseph Kisby studied Medicine in Dublin, becoming a doctor. Dr Kisby moved across Ireland in his job (no doubt to confuse 21st century genealogists). He married twice, his first wife dying of cancer in August 1884 and William subsequently remarrying his cousin's daughter, Elizabeth Larkin, in October 1884. She was 18 years his junior.

Dr Kisby must surely be the most prolific Kisby. Between his two wives and an apparent mistress too, he produced a total of 17 children!!

Unfortunately for his wife Elizabeth and his largely young family, Dr Kisby died suddenly and tragically on 19 November 1895. He was 51 years old. Living in the Lisnafeddally area of County Monaghan, he had been called out at night during a storm to attend a patient a mile away. He set out on foot but managed somehow to get lost, falling into a ditch and fracturing his skull on a rock, which killed him instantly.

His widow, Elizabeth, emigrated to New York in 1920, together with her son Edward.

At last I've managed to finish (and upload to my Kisby website) the annotated pedigree sheets (IR1A) for
Richard KISBEY of Dublin, who gave us the surname variant KISBEY. There are KISBEYs today in the UK and also on the West Coast of the United States.

The KISBEYs are particularly notable, in contrast to the generally humble KISBYs. Richard's namesake son Richard was a parliamentary correspondent for The Times newspaper in London. Another son William became a wealthy County Court Judge in Belfast and Dublin. Several of Judge William's children emigrated to Canada. There is even a town in Saskatchewan named Kisbey after William's son Richard Claudius KISBEY, who had settled in the region, married the local MP's daughter and ran the local mail driving contract. Richard invested in land, some of which he sold in 1904 to become the site of a new settlement that took his name.

One day I need to work out where the Dublin KISBEYs originated. Ireland was part of Great Britain at the time, so I suspect Richard Snr's father may have arrived in Dublin from the mainland, though this is entirely conjecture at the moment based on his status and religion (Church of England). Watch this space!

http://kisby.one-name.net/kisby-family-lines.htm
Posted by Sean K at 15:11 No comments: 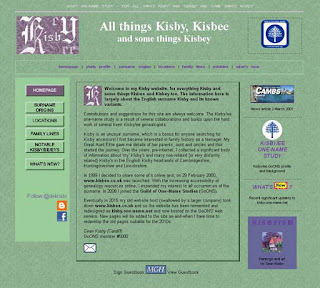 My Kisby/ee/ey website has had a revamp, relocation and a rename. This was forced on me when my previous webhost, Madasafish, took it upon themselves to close down my free hosting account. In July I noticed www.kisbee.co.uk had disappeared along with its email account.

By fortunate coincidence the Guild of One-name Studies (GOONS) launched a website hosting project in June 2015. As a member of GOONS I have been able to move my Kisby/ee/ey website to their servers - and the advantage will be, if the project is successful, my webpages will be preserved there is something happens to me (or I leave the GOONS). I've taken the opportunity to smarten and simplify the website, adding the most important pages from the previous site, while designing a few new ones.

To complicate matters further (and save me having to think up more than 140 characters at a time) I'm now tweeting Kisby/ee thoughts, musings and announcements on Twitter.

Of course, I'll continue my blog mutterings as well, when I can think of something interesting requiring more than eighteen or so words...

Website in the usual place...http://www.kisbee.co.uk
Posted by Sean K at 01:56 No comments:

One mystery solved and another mystery raised, this time involving Kisby ancestors of mine. My Great-times-four Uncle William KISBY died in 1897 leaving a last will and testament, in which he named two of his daughters Susan and Eliza GRAY. This was strange because I couldn't find any record of a GRAY/KISBY marriage, let alone two. I put the mystery to one side and only came back to tackle it recently.

As luck would have it, Susan and Eliza GRAY were living next door to one another in Peterborough in the 1881 and 1891 Censuses, with their husbands George GRAY and David GRAY. Fortunately both couples were around in 1911, when the census asks for detail about how long husbands and wives have been married.

It transpires that Eliza KISBY married in 1870 age 17 to David Gray CODD, in the area of his family's home village of Long Sutton, Lincolnshire. Susan KISBY had also married age 17 in 1866 to a George CODD, though this was in London (shortly before her sister Martha married in nearby Stepney).

Why the CODD brothers became GRAY is the new mystery to be solved. Their mother was born Ann Milson GRAY, so it was a family name but not the birth name (or marriage name) of George and David. George and Susan returned to live in her home village of Coates, Cambridgeshire, where their first child was born Martha Ellen CODD, but their subsequent children were GRAY's. Something ...erm ...fishy happened in the late 1860's in the Fenland area that I've yet to discover...
Posted by Sean K at 02:21 No comments:

Peterborough Family History Society have done a marvellous job in transcribing the registers of the Cathedral in Peterborough, from the 1600's to the 2000's. This 400 years of history is all available on CD for the very reasonable sum of £10 (of which £1 goes to the Cathedral funds). Peterborough is the major city in the Kisby heartlands, so I couldn't resist investing some of my savings in this purchase.
The Cathedral was of very major importance. It is known for its imposing (and unique) west facade, built in the 1200's. Henry VIII's first wife Katharine was buried at the Cathedral. Mary Queen of Scots was also interred here. Despite its size, christenings, marriages and burials were not common because, until the 1530's, the building was used as a monastry. It didn't have a font until 1615. Marriages and burials were often of people with a link to the Cathedral ...in contrast, the nearby parish church of St John seems to have been incredibly busy!! But to my delight I found there were a small number of Kisby's who appear in the Cathedral registers.

Most prominent is one Clement KISBY. Clement, it turns out, was the Sexton for the Cathedral. As far as I understand, a sexton is a glorified caretaker with a key role in running and maintaining the building and its grounds. Clement lived a long and honourable life, it seems. His first wife, Faith, dies in 1668. Later the same year Clement gains a new wife, Ann, at a Cathedral marriage. Clement's son (also called Clement)  marries at the Cathedral too. In 1699 Clement "Sexton of this Church above 50 years"dies in his 80th year and, more impressively still, is "Buryed in the body of the church near the west door." It will be interesting to know whether there is a marker of any kind!

Ann, his widow, seems to have been given a place in an almshouse and dies in 1719.

Well, maybe the parish registers of St John's will reveal where Clement and Faith came from. Clement KISBY isn't a name I've come across until now. But nice to find a KISBY playing such a long and prominent role in city life! 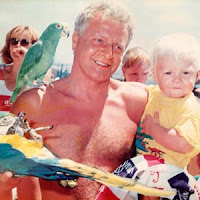 Mind you, Phil's daughter-in-law is a 'Charlie', so maybe we can at least live in hope of some 21st century Charlottes to continue the tradition!
Posted by Sean K at 02:31 No comments: